Browse: Home   /   The first booklet on Industrial Heritage in Egypt and Iran 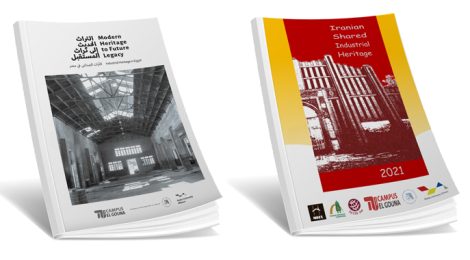 The first booklet on Industrial Heritage in Egypt and Iran

ticcih hq / July 6, 2022 / Comments Off on The first booklet on Industrial Heritage in Egypt and Iran / Uncategorized

One of the many aims of TICCIH is supporting projects and activities on industrial heritage worldwide by awareness-building and enhancing the accessibility of their output to a larger audience. The research project “Modern Heritage to Future Legacy (MHFL): Conservation and Conversion of Modern Industrial Heritage Sites” is happy to announce the release of the first two booklets with selected case studies on industrial heritage in Egypt and Iran.

Egypt and Iran have experienced industrial development since the early 19th century. Its historical industrial structures bear witness to the productive intertwining of the flow of resources and ideas between the so-called Global North and Global South. Today, both countries comprise a rich collection of historical industrial structures of several types and scales. These, however, receive little attention and appreciation from scholars, governments, and the public, especially compared to both countries’ rich pre-modern heritage. Additionally, the field of modern industrial heritage has long been, and in some cases still is, a largely neglected aspect, especially in the disciplines of urban heritage and conservation. This neglect is predominantly due to the missing comprehensive documentation of the built industries while linking their history to modern industries’ national, regional, and global narratives. Based on the above, the following research project was established: “Modern Heritage to Future Legacy (MHFL): Conservation and Conversion of Modern Industrial Heritage Sites”. MHFL is a cooperation between the Georg Simmel Center for Metropolitan Studies at Humboldt-University Berlin (Dr. Heike Oevermann), Technical University Berlin – Campus El Gouna (Dr. Hassan Elmouelhi, Martin Meyer, Mirhan Damir, Hellen Aziz, Mohamed Hamdy, and Muhammad Martini) and the MHFL Research Hub at Tarbiat Modares University in Tehran (Prof. Dr. Mohammadjavad Mahdavinejad). The research project was conducted in 2020 and funded under the framework of the excellence strategy by the German government and the States via the Berlin University Alliance and the Berlin Centre for Global Engagement.

As both countries comprise several historical industrial structures that suffer from vacancy, neglect, or destruction, the project aimed to document this heritage, explore its historical role, and shed light on the interlinkages and dependencies between the Global North and the Global South as expressed in processes of national industrialization. Using several methodological approaches, the research project conducted the first academic online conference on the topic of modern industrial heritage in Iran and Egypt on May 31st (You can read more on the academic online workshop in the TICCIH Bulletin 93 – 2021 III: https://ticcih.org/wp-content/uploads/2021/09/TICCIH-Bulletin-93-FINAL.pdf, pp. 9-10). The booklets were compiled with the help of desktop research utilizing several secondary data as well as primary data collection; in addition to archival work and conducted experts and non-experts’ interviews, several industrial sites were visited and photographed. The booklets are accessible and downloadable via the TICCIH Website, where limited copies will be printed to be disseminated to government officials and industrial site managers to shed light on the importance of safeguarding this still disregarded legacy.