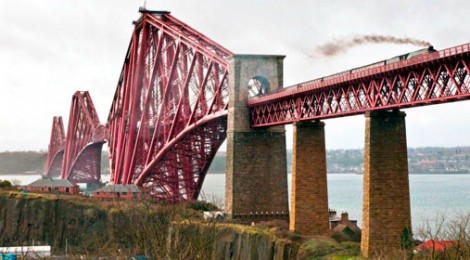 Image above: The Forth Bridge (with steam train) image provided by Miles Oglethorpe

The World Heritage Committee met in Bonn, Germany, in July 2015. It discussed and then included 24 cultural sites in the world heritage list: others being rejected, deferred or referred.  1/4 of these newly-inscribed cultural properties are industrial or transport-related, themes still stated by several members of the committee (that is states parties, member countries of the United Nations) to be under-represented on the list. With slightly shortened syntheses, the industrial properties are:

Rjukan-Notodden Industrial Heritage Site (Norway) — hydroelectric power plants, transmission lines, factories, transport systems and company towns in a dramatic landscape of mountains, waterfalls and river valleys. The complex was established by the Norsk-Hydro Company to manufacture artificial fertilizer from nitrogen in the air, and manifests an exceptional combination of industrial assets and themes of new global industry in the early 20th century. Criteria (ii) (iv)

Speicherstadt and Kontorhaus District with Chilehaus (Germany) —on a group of narrow islands in the Elbe, Hamburg, a coherent ensemble of port warehouses (300,000 m2) built between 1885 and 1927, partly rebuilt 1949-1967.  The complex exemplifies the effects of the rapid growth in international trade in the late 19th and early 20th centuries. (iv)

Sites of Japan’s Meiji Industrial Revolution: Iron and Steel, Shipbuilding and Coal Mining (Japan)  twenty three component parts bear testimony to the rapid industrialization of the country from the middle of the 19th century to the early 20th century, through the development of the steel industry, shipbuilding and coal mining. The site illustrates the process by which feudal Japan sought technology transfer from Europe and America, considered the first successful transfer of Western industrialisation to Asia. (ii) (iv)

Nagasaki Giant Cantilever Crane – part of the Sites of the Meiji Industrial Revolution – now and in 1913. (images provided by Miles Oglethorpe)

The Forth Bridge (United Kingdom) —Its distinctive industrial aesthetic is the result of a forthright and unadorned display of its structural components. Innovative in style, materials and scale, the Forth Bridge is an important milestone in bridge design and construction during the period when railways came to dominate long-distance land travel. It opened in 1890 and continues to carry passengers and freight. (i) (iv)

Aqueduct of Padre Tembleque Hydraulic System (Mexico)—1530-1560, the highest single-level arcade (39.65 m) ever built in an aqueduct, along with its water catchment attributes. Built with support from the local indigenous communities this hydraulic system is an example of the exchange of influences between the European tradition of Roman hydraulics and traditional Mesoamerican construction techniques, including the use of adobe. (i) (ii) (iv)

Fray Bentos Cultural-Industrial Landscape (Uruguay)— the industrial complex was built from 1859 to process meat produced on vast prairies nearby. It includes buildings and equipment of the Liebig Extract of Meat Company, which exported meat extract and corned-beef to the European market from 1865, and the Anglo Meat Packing Plant, which exported frozen meat from 1924. Through its physical location, industrial and residential buildings as well as social institutions, the site presents an illustration of the entire process of meat production on a global scale.

The Climats, terroirs of Burgundy (France) —precisely delimited vineyard parcels on the slopes of the Côte de Nuits and the Côte de Beaune This cultural landscape consists of two parts. Firstly, the vineyards and associated production units including villages and the town of Beaune, which together represent the commercial dimension of the production system. The second part includes the historic centre of Dijon, which embodies the political regulatory impetus that gave birth to the climats system. The site is an outstanding example of grape cultivation and wine production developed since the High Middle Ages. (iii) (v)

Champagne Hillsides, Houses and Cellars (France) — The property encompasses sites where the method of producing sparkling wines was developed on the principle of secondary fermentation in the bottle since the early 17th century the historic hillsides, the production sites (with their underground cellars) and the sales and distribution centres (the Champagne Houses) – illustrate the entire champagne production process. The property bears clear testimony to the development of a very specialised artisan activity that has become an agro-industrial enterprise. (iii), (iv), (vi)