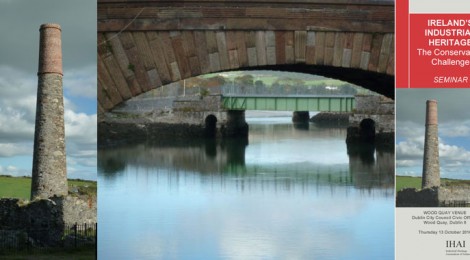 This one-day Seminar will focus on the challenges facing the heritage sector in the conservation of historic industrial sites. The primary aim of the Seminar is to present a number of conservation case studies in response to feedback from the participants at the IHAI CPD Induction Module delivered last year. The projects selected are of local, national and international significance and will be of interest to a specialist and general audience.

The presentations will be followed by a structured discussion teasing out the issues raised by the application of the Dublin Principles as a common standard for industrial heritage conservation – the joint ICOMOS / TICCIH* Principles for the Conservation of Industrial Heritage Sites, Structures, Areas and Landscapes. * International Council on Monuments and Sites / The International Committee for the Conservation of the Industrial Heritage.

Booking:
Please book by emailing the following information to info@ihai.ie

Course Fee:
The fee for the one-day course is €25 (€15 for IHAI members). Tea and coffee will be provided on arrival and plenty of time has been left in the schedule for attendees to make their own lunch arrangements in one of the many nearby restaurants and coffee shops before returning for the afternoon session.

If you require an invoice, please email IHAI Treasurer at info@ihai.ie

Queries:
If you have any questions regarding this course, please email to info@ihai.ie

09:30 REGISTRATION Tea and coffee will be served on arrival.

10:00 WELCOME by Dr. Ron Cox, Secretary of the Industrial Heritage Association of Ireland.

Trying to assess what might be found when access is not possible for opening-up works can result in large uncertainties in contracts. Large debris build-up in stream locations, and depth of historic structures in either water or cutting, can restrict access until such time as the repair contract is underway. This can be particularly prevalent in industrial heritage structures such as weirs, sluices, millponds and kilns. Frequently there are additional complexities such as the need to maintain flow of water and the ultimate aims of putting the structures back into working order. This talk will encompass recent works to a sample of such historic industrial structures.

Lisa Edden is a Consulting Structural Engineer who, having worked on a number of projects with major engineering firms, set up her own practice in Ireland in 1998. Since then she has been involved in the structural engineering aspects of the repair and rehabilitation of a range of historic buildings and structures. In 2015 Lisa won the ‘Protection of the Built Environment Conservation Award’ for her use of innovative engineering techniques in the conservation of the interior of a protected structure in Aungier Street, Dublin. She is the current chairperson of the Building Limes Forum of Ireland.

The Liffey Bridge, popularly known as the Ha’penny Bridge, marks its bicentenary this year and is a recognised tourist icon of Dublin. Associated with the Coalbrookdale Works of Shropshire England, it was the first cast-iron bridge to cross the Liffey. Following a structural survey in 2001 a major refurbishment project was undertaken. This case study highlights the range of specialist skills required to undertake the conservation works to this significant historic structure. The project was granted a European Union Cultural Heritage Europa Nostra Award.

Michael Phillips was, until his recent retirement, City Engineer in Dublin City Council with responsibility for all infrastructures and services. The care and maintenance of the Capital’s historic bridges was part of his brief, and he coauthored with Albert Hamilton, ‘Project History of Dublin’s River Liffey Bridges’. Michael is a Fellow and former President of Engineers Ireland, and is also a Fellow of the Institution of Civil Engineers, London.

Londonbridge Road Pumping Station was part of the first main drainage scheme undertaken in Ireland in 1881 by the Rathmines and Pembroke Townships. In 1985 the Station was de-commissioned and the buildings and machinery gradually fell into a state of dereliction. After a considerable time lag this significant, but somewhat undervalued, remnant of industrial heritage was developed by Dublin City Council for social housing. The original pumping station is retained within the scheme, which contains 24 apartments. The scheme was completed in June 2008. The landmark chimney was also repaired and is retained within the scheme, which is called ‘The Pump House’.

Susan Roundtree is an RIAI Grade 1 Accredited Conservation Architect, who studied at the Dublin Institute of Technology. She has practice experience in both the public and private sectors. She obtained a Masters in Urban & Building Conservation from UCD in 1991 and a Master of Letters by research in TCD in 1999 on the history of Irish brickwork. This topic continues to be her area of special interest and she has contributed to several publications on related topics. She is a Fellow of the Royal Institute of the Architects in Ireland, and an active member of ICOMOS Ireland and of the Building Limes Forum of Ireland. She is also an occasional lecturer for the School of Architecture in UCD and for the Irish Georgian Society.

12:45 BREAK FOR LUNCH
Participants can avail of a range of restaurants and cafes in the vicinity of the Wood Quay Venue.

Having originally been included on the UK’s Tentative List of World Heritage Site candidates in 1999, the nomination of Forth Bridge finally commenced in 2011, and was submitted to UNESCO in January 2014. It was subsequently inscribed onto the World Heritage List on 5 July 2015. A key component of its successful nomination was the associated Management Plan and the presentation will describe both how the Plan was prepared, and how it has been implemented since then.

Miles Oglethorpe is Head of Industrial Heritage at Historic Environment Scotland, the public body responsible for safeguarding and promoting the historic environment in Scotland. He is a Board member of TICCIH, and has edited, authored and co-authored a number of books and papers relating to industrial heritage, and energy in particular. Most recently, he led the team responsible for preparing the successful World Heritage nomination for the Forth Bridge, and is coordinating the development of an Industrial Heritage Strategy for Scotland.

Neil Cossons has been active in the fields of industrial history and archaeology, museums and heritage since the 1960s. He was the initiator in 1973 of the First International Congress on the Conservation of Industrial Monuments held at
Ironbridge Shropshire, and for twelve years was Director of the Ironbridge Gorge Museum, and subsequently Director of the National Maritime Museum Greenwich. After 14 years as Director of the Science Museum in London, he was appointed Chairman of English Heritage (2000-2007) and Pro-Provost and Chairman of Council of the Royal College of Art (2000-2015). He was appointed a Trustee of the Heritage Lottery Fund in 2016. He is a founder member and Life President of TICCIH, also a Past-President of the Association for Industrial Archaeology and of the Newcomen Society, and has published and broadcast widely on industrial heritage. He was knighted in 1994 for his work in museums and heritage.