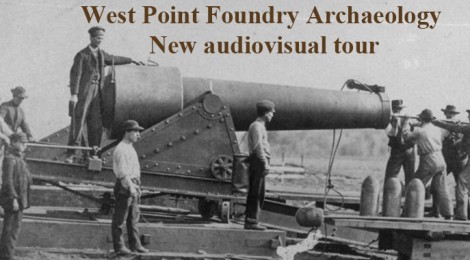 Select image above for audiovisual tour

The foundry location was the site of Michigan Technological University Industrial Archeology Field schools from 2002 to 2008.

The West Point Foundry (1818-1912) began operating as a munitions contractor making cannon and shot. The foundry grew to employ hundreds of workers manufacturing a wide array of weaponry and ordinance, steam engines, water wheels, iron clad sailing ships, architectural elements, domestic stoves and ovens, and innumerable other cast iron objects. The foundry’s prominent owners were among the first industrialists to employ “vertically integrated” production, where they controlled every aspect of manufacture from extracting raw ore to marketing their finished products.

The West Point Foundry site is listed on the National Register of Historic Places because it played an important role in industrialization at local, regional, national, and international levels. It was one of four national armories established following the War of 1812 and enjoyed numerous government contracts for cannon, shot, and shell. During the Civil War, the foundry manufactured much of the Union Army’s artillery. These products included the famous Parrott gun, a refined rifled cannon developed by the foundry’s Superintendent, Robert Parrott. Guns produced in Cold Spring included both brass and iron cannons that ranged from ten to four hundred pounders. The foundry staff became so famous for their quality work that Jules Verne critically immortalized them in his 1865 book From The Earth to the Moon. In that text, Verne wrote of the artillery production process the staff used at the famous “Goldspring Foundry” in New York as they cast the tremendous cannon and shell that carried his crew to the moon.

Foundry workers also manufactured a variety of non-military cast iron products that were marketed throughout the United States and abroad. For example, it manufactured machinery for cotton mills in America’s southern states and sugar mills in Austria, Nova Scotia, and the Caribbean. Some of America’s earliest steam engines were built there, as well as several of the first locomotives manufactured on this continent. The company cast and constructed the Best Friend (1830), the West Point (1831), the DeWitt Clinton (1831), the South Carolina (1832), the Phoenix (1832), and the Experiment (1832). The foundry also cast both cannon and structural parts for iron-clad ships which transformed nautical technology. Workers cast the marine engines and boilers for the frigates Missouri and Mississippi and the steamships Erie, Champlain, Rochester, and Swallow. When at peak production, the foundry produced a dizzying array of objects, including high- and low-pressure stationary steam engines and boilers, a variety of mill equipment and machinery, sugar cane presses, kettles, box stoves and ovens, wheels, plummer blocks, gudgeons, shafts, cranks, flanges, and even the water pipes, hydraulic cylinders, and elbows for the Croton water supply system in New York City.

The foundry employees were international as their products. The owners initially recruited skilled workers and supervisors from Ireland and England, despite British laws designed to prevent it. The foundry’s influence led to the incorporation of the villages of Cold Spring and Nelsonville, and both became early examples of company towns. The first owner imported Spanish techniques after studying in that country. The West Point Foundry became a first-class casting facility, maintaining an office and finishing facility in New York City. By mid-century, several hundred workers were employed at the foundry. Despite the importance of their daily work, archaeology provides the clearest insights into the workers’ daily lives.

The foundry location was the site of Michigan Technological University Industrial Archeology Field schools from 2002 to 2008.

← Bulletin 62
Heritage at Risk: Ancient gold mine of Sakdrissi in Georgia →