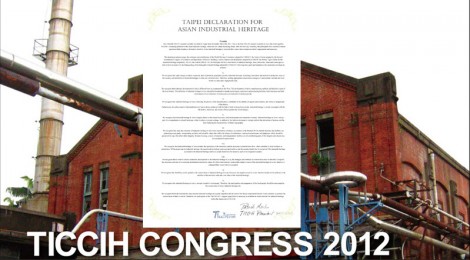 A Milestone for TICCIH Congress: Taipei Declaration and Asia Industrial Heritage Network
TICCIH Congress 2012 in Taiwan, was the first TICCIH Congress held in Asia since 1978. There were more than two hundred delegates from twenty-six countries, an extremely high standard of papers and discussions, and the arrangements of the exhibition, workshops and tours were handled impeccably. The fact that it ended with the establishment of an Asia Industrial Heritage Network for TICCIH and the Taipei Declaration justified all the hard work and effort which was put in by numerous individuals and organisations.

The Fifteenth TICCIH General Assembly was held in Taipei from November 5th to 8th, 2012. This is the first TICCIH General Assembly in Asia; the event signifies TICCIH’s increasing attention to the Asian industrial heritage, which are now under increasing threat. After the four-day Assembly, the participants have reached a mutual agreement that adopting a declaration based on Asian industrial heritage to promote their conservation and preservation is appropriate and necessary.

I. The declaration acknowledges the existence and contributions of the World Heritage Convention adopted by the World Heritage Committee, the Venice Charter adopted by the Second International Congress of Architects and Specialists of Historic Buildings, various charters and declarations adopted by ICOMOS, the Nizhny Tagil Charter for the Industrial Heritage adopted by TICCIH, the Joint ICOMOS-TICCIH Principles for the Conservation of Industrial Heritage, Sites, Structures, Areas and Landscapes as well as the Convention for the Safeguarding of the Intangible Cultural Heritage adopted by UNESCO. Following their spirit and foundation, this declaration develops its contents.

II. We recognize that rapid changes in urban expansion, land exploitation, population growth, industrial structure, technology innovation and method of production leads to the vacancy and demolition of industrial heritage in urban and suburban areas. Therefore, starting appropriate conservation strategies at international, national and local levels is a must and a high priority task.

III. We recognize that industrial development in Asia is different from its counterparts in the West. The development of native manufacturing methods and facilities is part of the local history. The definition of industrial heritage in Asia should be broadened to include technologies, machinery and producing facilities, built structures and built environment of pre-industrial revolution and post-industrial revolution periods.

IV. We recognize that industrial heritage in Asia, witnessing the process of the modernization, contributes to the identity of regions and countries, and forms an integral part of the history.

Furthermore, the achievement of industrialization in Asia is always achieved with the help of hard-working local people. Industrial heritage is closely associated with the life history, memories, and stories of local people and social changes.

V. We recognize that industrial heritage in Asia is deeply related to the natural resources, land development and vernacular economy. Industrial heritage in Asia is always part of a comprehensive cultural landscape, either in urban or in rural settings. In addition to the built environment, it strongly reflects the interaction of humans and the land, featuring the characteristics of hetero-topography.

VI. We recognize that many key elements of industrial heritage in Asia were imported by colonizers or countries in the Western World, that the factories and facilities are pioneering avant-garde, incorporating aesthetic and scientific values that reflect the history of architecture, construction techniques and equipment which should be preserved in ways that reflect their integrity. Workers housing, sources of materials and transportation facilities are all contributing parts of this integrity and should also be considered for preservation.

VIII. We recognize that in order to ensure sustainable development of the industrial heritage in Asia, the strategies and methods for conservation must be flexible. Except for the structures and sites of exceptional architectural and artistic values for which intervention is undesirable, adaptive reuse of the industrial heritage for a new function to safeguard their conservation is accepted.

IX. We recognize that flexibility can be applied to the conservation of industrial heritage in Asia. However, the adaptive reuse for a new function should not be achieved at the sacrifice of the universal value and core value of the industrial heritage.

XI.We recognize that both national and trans-national industrial heritage are equally important and the need of the future cooperation between Asian countries to promote the conservation of them is crucial. Therefore, the participants of the 15th TICCIH Congress agree that it is necessary to establish an Asian network for industrial heritage within the framework of TICCIH.