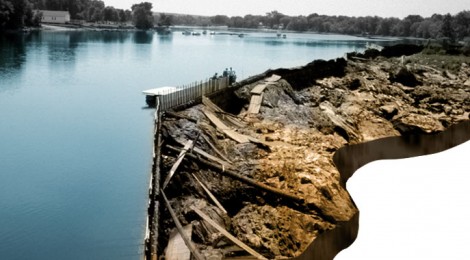 Lowell, Massachusetts, on the Merrimack River, is the home to America’s first great conglomeration of water powered textile mills. Probably stimulated by the example of New Lanark in Scotland, the Proprietors of Locks and Canals ultimately established the most influential cluster of mills in New England at the Pawtucket Falls in the early 1820s. Situated among a set of canals that allowed the effective head to be reused by several mills, this establishment provided not only an economic success, but also an inspiring model for other developers. The industrial history of Lowell has been celebrated in a variety of ways, not least of which is the establishment of the Lowell National Historical Park in 1978. Readers who wish to understand the complexity of development should look to Patrick Malone’s excellent book Waterpower in Lowell; Engineering and Industry in Nineteenth-Century America, 2009, Johns Hopkins University Press, or a more recent brief treatment in Industrial Archaeology Review, 34. I, 5-23, May 2014, entitled “Dams and Damages: Controversies Over Waterpower in Lowell.” This last piece thoroughly lays out the background of the matter we examine here today, hence I will be brief in my treatment of details.

The Pawtucket Dam is a crucial feature of the Lowell system of mills and canals, originally allowing ten mill complexes to wrest power from the falls in an efficient manner. The dam is in many ways the centerpiece of the historic industrial complex as well as a key to the interpretive scheme in the National Park; it provided power for the enterprises and illustrates the essence of the waterpower system for park visitors, supporting boat tours and power generation within park exhibits. Modified several times during its lifespan, this massive granite structure spans the river and channels water into the canal system for the mills, as well as the modern hydroelectric power plant constructed in the 1980s. Since the early days of the dam’s operation, it has included a flashboard system, constructed of wooden boards and iron pins, that extends the height of the dam and serves as a safety valve, failing when flood waters approach and overtop the flashboards.

In 2010, Enel North America, parent company of Boott Hydropower, Inc., the operator of the hydroelectric power station, proposed to replace the historic flashboard system with a pneumatic crest-gate system, consisting of a concrete cap on the dam, topped with hinged steel panels to be raised and lowered by inflatable rubber bladders on the downstream side, beneath the panels, and a compressor house to be built onshore adjacent to the dam. In 2011, with the agreement of the TICCIH Board, I entered a letter of opinion in the hearing process on behalf of TICCIH, opposing the proposed undertaking on the grounds that it would “have a profound adverse effect on the integrity of the historic resources of the Lowell National Historical Park.” 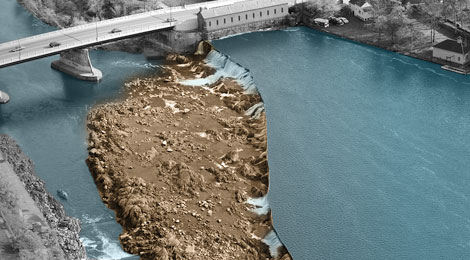 The proposal was also opposed by a number of other organizations, as well, including a state group called Preservation Massachusetts, the Massachusetts State Historic Preservation Officer, and by the National Park Service. However, the Federal Energy Regulatory Commission, the relevant agency for issuing the permits to modify the dam, decided to move forward with the plans, effectively rejecting the arguments for preserving the historic flashboard system. A renewed campaign to halt these changes has recently been mounted, and I have again entered an opinion on behalf of TICCIH. The resistance to change has also attracted the attention and involvement of the Advisory Council for Historic Preservation, an independent Federal agency that promotes preservation and wise use of the nation’s historic resources, and advises the President and the Congress on matters related to historic preservation. Made up of 23 members designated by Federal statute, the Advisory Council is in some ways the last resort, short of the court system, to settle disagreements among Federal agencies regarding preservation actions, particularly when government money and/or permits are involved. In the case of the Pawtucket Dam, we see a fundamental disagreement between the National Park Service, which advocates preservation, and the Federal Energy Regulatory Commission, which sees no compelling reason to deny the permit to modify the dam.

The Advisory Council issued a strongly worded set of findings and recommendations on February 22, including the explicit recommendation that FERC “not approve the Project to replace the existing flashboard system with a pneumatic crest gate system.” Other portions of the comments include guidance about carrying forward a consulting process that pays stronger attention to the historical values of this landscape. While the Advisory Council is, by definition, an advisory body, we feel that this set of findings is a significant step in the right direction toward assuring the protection of this important piece of America’s industrial heritage.